An understanding of statistical concepts and methods can help you make informed decisions when assessing external scientific evidence. There are two main branches of statistics: (1) descriptive statistics and (2) inferential statistics.

Descriptive statistics summarize and describe important features of the data. They most often use numerical measures (means, standard deviations) or graphical measures (boxplots and scatter plots).

Inferential statistics generalize findings from a random sample to make inferences about a population (as illustrated in Figure 1). Researchers use inferential statistics to make quantitative conclusions about assessment and treatment approaches of interest based on hypothesis testing. 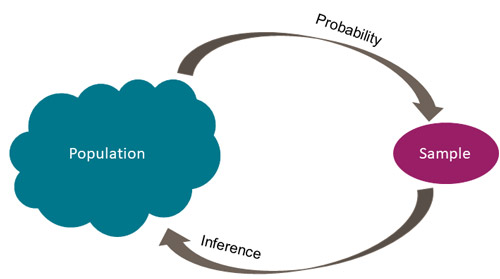 You will encounter a variety of statistical tests, and the types of statistical measures used in a study depend on the type of data collected. This page addresses common statistical terms and their implications in audiology and speech-language pathology research literature:

Statistical significance is a common term used in research to assess the strength of a study’s results. To determine if an experiment is statistically significant or not, researchers use a calculated probability, called a p value, to try to reject a null hypothesis (i.e., that there is no difference between two groups). A p value is the probability that the observed data from the treatment group and the comparison group are, in fact, different from each other and that this difference was not due to chance.

A very small p value under the pre-determined cutoff threshold indicates a very low chance that the observed data would occur if the outcomes of both groups were actually the same. Therefore, the differences observed in the data are statistically significant because the researchers rejected the null hypothesis.

The cutoff threshold for statistical significance can vary in research. However, a common threshold is .05 (p≤ .05). P values greater than .05 (p> .05) reflect that the differences are not statistically significant.

Clinical significance refers to the practical value or importance of the intervention effect. It means that the intervention makes a meaningful difference in the severity or functioning of the people with the disorder. In this respect, p values have their limitations because they do not tell us about the size of the effect or how well the intervention works. Therefore, researchers are beginning to encourage the use of additional measures to demonstrate a meaningful difference. Clinical significance demonstrates the size of the effect between two variables and, ultimately, the clinical importance of the relationship.

An effect size is a common measure of clinical significance used to estimate the differences between two groups (i.e., standardized mean difference) or the strength of an association between variables (e.g., odds ratio, relative risk ratio, Pearson’s coefficient). The following metrics are common indices used to calculate effect size.

Researchers use a statistical procedure known as a meta-analysis to combine data from studies addressing the same or similar questions and use forest plots to visually display the treatment effects.

On the Left Side

The left side of the forest plot is a data chart of all studies included in the meta-analysis and each study’s results comparing the relationship between the experimental group (Treatment A) and the control group (Treatment as Usual). The chart includes the total number of subjects in each group, the weight of each study (i.e., the influence of each study on the overall results), the effect size estimates and their respective confidence intervals, and the combined data from all studies.

On the Right Side

The right side of the forest plot reveals a graphic representation of the same information.

The black diamond represents the pooled effect size—that is, the point estimate and confidence intervals when you combine all the data from the weighted studies.

Because results are always subject to some degree of error, the exact value is never truly known. Instead, the results are provided as estimates, and you need to determine how precise the estimates are in relation to the statistics’ true value. In Figure 3, black lines on each side of the green boxes reflect the precision of each effect size. The following factors can measure precision:

Statistics in diagnostic research are used to evaluate the accuracy of assessment or screening instruments and their ability to accurately predict the presence or absence of a condition or disease. Several statistical terms used in treatment literature can also be found in screening or diagnostic research. For example, OR and relative risk are common measures that researchers use to estimate the effect size of dichotomous outcomes (e.g., yes/no). In audiology and speech-language pathology literature, researchers typically use OR and relative risk to measure the effectiveness of a test in order to identify individuals with the disorder versus individuals without the disorder.

Validity tells you whether an assessment is measuring what it is intended to measure. Reliability is a necessary property of any valid assessment, but it is not enough to guarantee the validity of the assessment. So, an assessment could be reliable.

Figure 3. Representations of High and Low Reliability and Validity

Diagnostic accuracy is the ability of the test to discriminate people with the disorder from people without the disorder. Different aspects of diagnostic accuracy can be quantified by statistical measures such as sensitivity and specificity, predictive values, and likelihood ratios. These measures are very sensitive to the characteristics of the population in which they are measured.

Predictive value is another measure for diagnostic accuracy. This measure gives insight to the observed results and the chances that they are the true results.

Likelihood ratio is the probability of a given diagnostic test score would be expected in an individual with the disorder of interest compared to the probability that the same result would be expected in an individual without that disorder. The calculations for positive and negative likelihood ratios consider the sensitivity and specificity of the test, which makes likelihood ratios less susceptible to the influence of a disorder’s prevalence rate.

“LR– concerns confidence that a score in the unaffected ranges come from a person who truly does not have the target disorder.” (Dollaghan, 2007, p. 93) 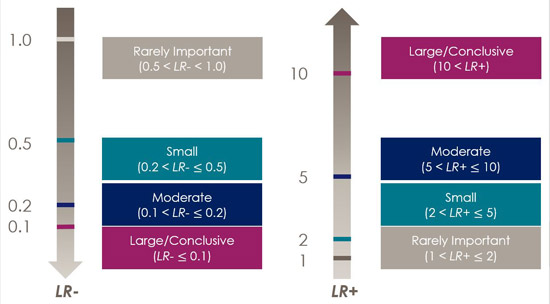 In Figure 5, LR+ equals 5.53, which means that you can be moderately confident that a failed hearing screening comes from a person with hearing loss. LR– is also equal to 0.2, which means that you can be confident that an unremarkable hearing screening probably (with moderate likelihood) came from a person without hearing loss.