The March 2007 Governance Structure and Process Committee Report proposed a new model for ASHA’s governance, and it has been a decade since the implementation of that model. Best practices in association management suggest a periodic review of governance to ensure efficiency and effectiveness. Therefore, in 2017, ASHA’s Board of Directors (BOD) appointed the Ad Hoc Committee on Governance Review (Ad Hoc GR) to review and evaluate aspects of the 2007 changes to ASHA’s governance structure and processes. The work of the Ad Hoc GR was completed in December 2018 and submitted to the BOD for their consideration. The ensuing report [PDF] and Leader Blog article details the work and four recommendations of that committee.

Two of the recommendations were operational in nature and at their October 2019 BOD meeting, the BOD supported moving forward with their implementation as resources allow. They are:

The remaining two recommendations were more substantial and would require bylaws changes. The BOD also supported continuing to move forward with these recommendations as revised by the MAG they are:

3. Sunset the Advisory Councils and create a new Committee of Ambassadors (Approved by members on March 17, 2020)

In early January 2020, a bylaws resolution was submitted for BOD consideration to sunset the Advisory Councils and create two at Large BOD members (one for audiology and one for speech-language pathology). An email was sent to all members on January 6, 2020 opening a comment period for consideration and questions with links to the bylaws resolution.

Comments were received and reviewed by the BOD at their February 2020 meeting. Subsequently the BOD approved the resolution at their February BOD meeting to amend the bylaws to sunset the Advisory Councils and create two at large BOD members. This bylaw change requires a member vote because it revises section 3.3, Rights Reserved to the Members. This member special election was conducted from February 27 through March 17, 2020. The members approved the changes that will take effect on January 1, 2021.

4. Implement a Hybrid Election for the Board of Directors

In early May, a bylaws resolution was submitted for BOD consideration to transition to a hybrid election for the Board of Directors to better ensure diversity representation on the BOD as well as the continued positioning of well-qualified and experienced individuals in these critical leadership positions. An email was sent to all members on May 4, 2020 opening a comment period for consideration and questions with links to the bylaws resolution.

What is a hybrid election?

Currently, the President-Elect and Vice President positions on the BOD have contested elections. Up to three candidates per position are submitted for member consideration by the Committee on Nominations and Elections. Members receive an election ballot and vote for one candidate in each position. The percentage of eligible members who participate in the annual elections has been less than 6% for more than a decade, with a decline to 4% in the most recent years. The candidate who receives the most votes in each position is considered the successful candidate for that position.

Why is there no member vote?

The resolution also expands the Committee on Nominations and Elections to nine members to include the President-Elect and to allow for more diverse representation on the Committee. All ASHA members will still have the opportunity to nominate candidates for all BOD positions, both uncontested and contested.

After reviewing comments received and much discussion on this issue, the BOD approved the resolution to transition to a hybrid election at their June BOD meeting.  ASHA will begin to implement actions necessary to prepare to transition the nomination and election process effective January 1, 2021.

Find answers to questions regarding the bylaws change to transition to a hybrid election by visiting our Frequently Asked Questions. 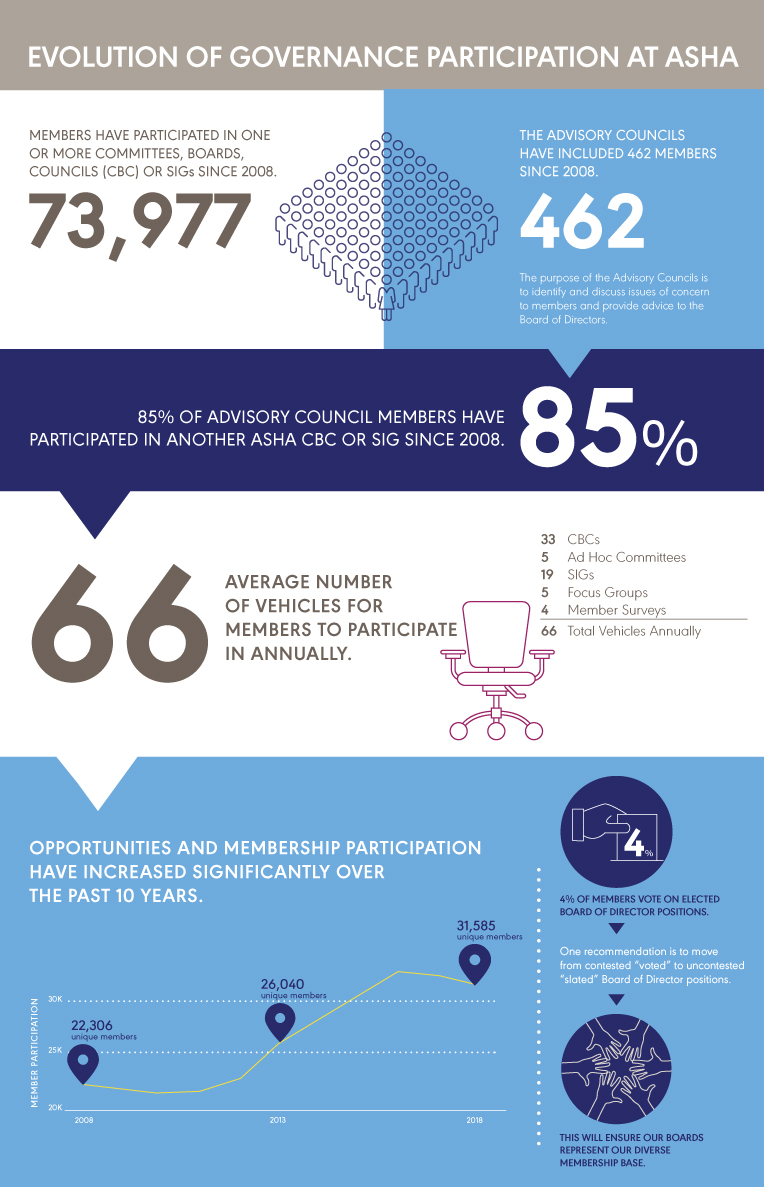