Early detection of hearing loss and immediate intervention for people with intellectual disabilities (ID) are imperatives for their cognitive, social, and vocational well-being. The professional literature reports increased prevalence of hearing loss for people with ID compared to their general-population peers. It also reflects undetected hearing loss for individuals with ID, along with undertreated and unserved experiences once hearing loss is identified. The hearing health of children with Down syndrome (DS) has received considerable attention in published reports, and some studies have examined the hearing status of adults with ID in institutional settings. However, few investigations have focused on adults living and participating in the general community (i.e., their most frequent experience now in the United States and many other countries). This essay will discuss the hearing status reported for 9,961 non-institutionalized adults with ID (Herer, 2012).

Other studies have discussed the hearing status of adults with ID residing in institutional settings, reporting rates of hearing loss ranging from 21% to 70%. These rates varied with age, with individuals younger than age 40 showing lower rates compared with older persons with ID; and those without DS exhibiting lower rates compared with those with DS. Further, a number of studies indicated a persistent lack of hearing loss identification for many adults with ID prior to their being study subjects. Essentially all investigations recommended regular hearing and health screenings for adults with ID (H. Evenhuis et al., 2004; H. M. Evenhuis, 1995; H. M. Evenhuis, Theunissen, Denkers, Verschuure, & Kemme, 2001; van Allan, Fung, & Jurenka, 1999; Van Buggenhout et al., 1999).

Hearing Status of Adults with ID Living in Their General Communities

Few studies of non-institutionalized adults with ID are reported in the literature. One noteworthy and comprehensive investigation (Meuwese-Jongejeugd et al., 2006) in The Netherlands of 1,598 individuals ages 18–70 found an overall prevalence rate for hearing loss of 36%. This outcome was twice that of the 16% to 17% prevalence rates reported for general-population studies in Great Britain, Italy, and Australia (Davis, 1989; Quaranta, Assennato, & Sallustio, 1996; Wilson et al., 1999). Further, a remarkable 48% of subjects with ID had not been identified with hearing loss before this study was undertaken.

The Meuwese-Jongejeugd et al. (2006) study also revealed progressively greater prevalence rates of hearing loss for each age decade from 18–30 through 61–70 in persons with ID. Those study subjects with DS showed significantly greater rates at each age decade compared with the rates for persons with ID unrelated to DS. The rates of hearing loss for participants with DS ranged progressively from 36.4% (ages 18–30) to 100% (ages 61–70). By striking contrast, the hearing loss prevalence rates for study subjects with ID not due to DS increased steadily from 7.5% (ages 18–31) to 52.3% (ages 61–70). Notably, the rates in the Meuwese-Jongejeugd et al. study for both groups with ID in each age decade far exceeded the rates reported for the general-population studies of Great Britain (Davis, 1989) and Italy (Quaranta et al., 1996). The latter prevalence rates of hearing loss ranged from 1.8% for ages 18–30 to 37.7% for ages 61–70.

Hearing and Other Ear Outcomes From a Study of 9,961 Non-institutionalized People with ID

With the above as background information, let's now review the recently reported study of hearing outcome findings of 9,961 non-institutionalized individuals with ID (Herer, 2012). These adults, 18–55 years of age, participated in sports competition events globally over the past decade sponsored by Special Olympics International. The hearing status and ear canal health of this very large sample provides informative perspectives of hearing and ear care needs of individuals with ID living within their general communities.

The hearing examination protocol for this study included ear canal examinations, otoacoustic emissions (OAE) screening, pure tone screening at 25 dB for 2,000 Hz and 4,000 Hz using air-conduction earphones, and tympanometry screening. Those individuals not passing the pure tone screening received pure tone threshold testing of 1,000, 2,000, 4,000, and 8,000 Hz by air-conduction earphones; and 1,000, 2,000, and 4,000 Hz by bone-conduction receiver placed on the mastoid process behind an ear (Herer & Montgomery, 2006). All audiometers were calibrated to the appropriate American National Standards Institute standards for pure tone testing. All threshold testing was conducted in very quiet sound environments, mostly within sound booths brought to event sites. All testing was conducted by experienced audiologists, speech-language pathologists, and other health care professionals who were trained to use the investigation's protocol. This hearing examination protocol was found to be very efficient in detecting hearing loss and ear canal conditions in large groups of individuals with ID being screened/tested within short time periods.

The outcome results for the 9,961 individuals with ID were gathered at seven Special Olympics (SO) sports events from 2004 through 2011. As seen in Table 1, there were strong similarities and some differences for outcomes among these events. For example, the overall prevalence rate of hearing loss for the seven events was 23.7%; but the rates clustered between 17% and 22.9% for five events, while rates for two events reached 32.2% and 38%. These differences may be due to different groups of individuals with ID participating at each event. Nevertheless, there is a notable difference in the overall central tendency of these data (23.7%) and that reported for the general non-ID population; that is, 1.4 times greater than the 16%–17% rate found in general-population studies of Great Britain, Italy, and Australia (Davis, 1989; Quaranta et al., 1996; Wilson et al., 1999).

Further, Table 1 reveals that the overall prevalence rate of sensorineural hearing loss (SNHL) for people with ID across the seven SO events was 12.8%, a rate greater than expected in the general population 18–55 years of age. Most of these individuals were candidates for hearing aid use. The overall prevalence rate for conductive/mixed (C/M) loss found at these events, 10.9%, was higher than expected in the general population of adults. All with C/M loss were in need of medical evaluation.

Specific Outcomes for Type and Degree of Hearing Loss

The data for types of loss (SNHL, C/M) by the degrees of loss (mild, moderate, severe) for 7,560 individuals of the total 9,961 study population provide insights for intervention and treatment needs of adults with ID living in communities at large. As seen in Table 2, the prevalence of bilateral SNHL (10.5% average) is more frequent than unilateral SNHL (2.6% average). Essentially, the degree of bilateral losses is distributed equally between mild/moderate and severe losses, whereas the degree of unilateral losses is mostly mild/moderate in degree. This information certainly has implications for the variety of hearing aids that would be useful for these adults. Most important, though, these results reflect the significant unmet need for amplification of these individuals given that most had no prior experiences with hearing aids.

The rates of bilateral and unilateral C/M losses, as seen in Table 3, are quite similar at 4.9% and 4.1%, respectively. The degrees of loss are much the same for the bilateral and unilateral ear conditions as well. They are essentially mild/moderate in degree, typical of hearing loss outcomes from middle ear pathologies. These C/M loss findings for one or both ears of these adults with ID living in the general community emphasize their need for regular ear health examinations and treatment as needed to restore normal hearing.

Analyses of hearing loss at age decades (10–19, 20–29, 30–39, 40–49, & >50) for 5,713 of the 9,961 individuals with ID of this study show the significant amounts of hearing loss starting in early age decades. The results of Figures 1 and 2 illustrate the trend for increased prevalence of hearing loss with each advancing age decade. Especially notable is the prevalence of hearing loss for the three decades from 20 through 49 years, ranging from 16.8% to 36.1%. A comparison with general non-ID population data for these age decades (Great Britain-1989 and Italy-1996) is presented in Table 4 and reveals remarkable differences. People with ID show losses 3 to 9 times greater depending upon age decade. These data are in concert with the findings of the previously cited study by Meuwese-Jongejeugd et al. (2006) and strongly support the need for annual hearing evaluations for people with ID starting at age 18 and each year thereafter. Such a hearing care protocol is a way to identify the significant numbers of people with ID who experience early onset SNHL or C/M loss and who need immediate follow-up hearing care. 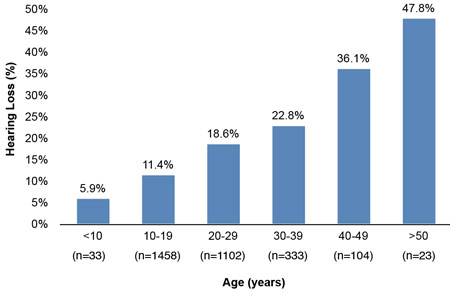 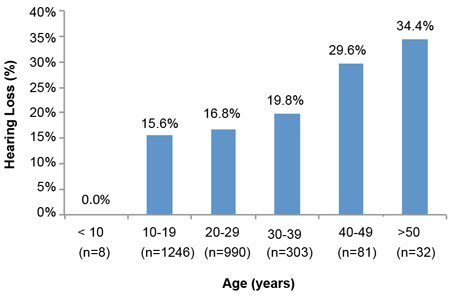 Finally, information about ear canal health problems of adults with ID needs to be highlighted in this essay. As shown in Table 1, a high prevalence rate (averaging 41%) of substantial ear wax was identified for the entire 9,961 individuals studied, not just those with hearing loss. This finding underscores the need for improved ear canal hygiene through regular ear examinations for all individuals with ID.

Summary of Findings and Implications for Adults With ID

The results from this 2012 report for the large sample of adults with ID living in the general community highlight the following:

Limitations of This Recent Study Leading to Opportunities for Future Research

Gilbert R. Herer, an audiologist, is director emeritus of Children's Hearing and Speech Center, Children's National Medical Center, and professor emeritus of Pediatrics, George Washington University, Washington, DC. He is currently adjunct professor of audiology, Chapman University, Orange, CA. Dr. Herer is former ASHA president (1989) and was awarded ASHA Honors in 2008. He is also founder/emeritus senior global advisor of healthy hearing for Special Olympics International. Dr. Herer received his bachelor and master of science degrees in communication sciences and disorders from Syracuse University under the mentorship of Dr. Louis M. DiCarlo and received the University's 1998 Outstanding Alumni Award. He completed his PhD degree in audiology at Northwestern University under the mentorship of Dr. Raymond T. Carhart, who is recognized as the Father of Audiology. Dr. Herer's current interests include the delivery of audiology services in a public health model and audiology graduate education of speech-language pathology students. Contact him at gilbert.herer@verizon.net.

Davis, A. C. (1989). The prevalence of hearing impairment and reported hearing disability among adults in Great Britain. International Journal of Epidemiology, 18(4), 911–917.