Diabetes mellitus is a group of diseases characterized by alterations in glucose metabolism, resulting in elevated blood glucose levels. Diabetes is usually classified as being of Type 1 or Type 2. In Type 1 diabetes, the beta cells of the pancreas no longer make insulin. In Type 2 diabetes, the pancreas continues to make insulin, but a cellular impairment in sensitivity to insulin results in raised blood glucose levels. Diabetes affects an estimated 10.7% of the adult U.S. population, about 40% of whom are undiagnosed (Cowie et al., 2009; U.S. Department of Health and Human Services, 2007).

People with diabetes commonly experience a variety of serious medical complications. The majority of adults with diabetes experience cardiovascular disease risk factors such as hypertension and high cholesterol, and the risk for adverse cardiovascular outcomes such as stroke or a fatal cardiac event is two to four times higher among adults with diabetes than for those without diabetes. Diabetic retinopathy is the leading cause of blindness in the United States. Among Americans, diabetes is also the leading cause of kidney failure. Severe forms of diabetic nerve disease are a major cause of lower extremity amputations. Diabetic autonomic neuropathies can affect cardiovascular, gastrointestinal, bladder, and erectile function. Because diabetes is a systemic disease with accompanying pathology affecting multiple organ systems, it is reasonable to inquire whether the auditory system is among those affected.

Early attempts to establish an association between diabetes and hearing impairment were not very convincing. Researchers, using data collected with the Hispanic Health and Nutrition Examination Study, examined pure-tone air conduction thresholds at 500, 1000, 2000, and 4000 Hz by diabetes status but found a higher threshold among diabetic persons only at a single frequency (500 Hz; Ma, Gomez-Marin, Lee, & Balkany, 1998). Researchers in the Framingham cohort study, one of the most respected population-based epidemiological studies, averaged pure-tone air conduction thresholds above 250, 500, and 1000 Hz as well as 4000, 6000, and 8000 Hz in the better ear and worse ear; they defined hearing impairment as a pure-tone average > 40 dB HL but found no association with diabetes (Gates, Cobb, D'Agostino, & Wolf, 1993; Ma et al., 1998). Only the Epidemiology of Hearing Loss Study, a community-based investigation conducted in Beaver Dam, Wisconsin, detected a modestly increased occurrence of hearing impairment among adults with diabetes compared to those without diabetes when they defined impairment as the pure-tone average above 500, 1000, 2000, and 4000 Hz > 25 dB HL in the worse ear (Dalton, Cruickshanks, Klein, Klein, & Wiley, 1998). Other studies to identify such a link were conducted in industrial or military settings and could not rule out the possibility that the effect of diabetes was limited to individuals who were predisposed to hearing loss due to occupational noise exposure (Ishii, Talbott, Findlay, D'Antonio, & Kuller, 1992; Sakuta, Suzuki, Yasuda, & Ito, 2007). Conflicting evidence has not allowed diabetes-related hearing impairment to gain much attention among research scientists nor acceptance among health care professionals.

Building epidemiological evidence depends on a robust definition of a condition, so that results can be compared across studies. For hearing impairment, however, no definitive definition has been established. Recently, using audiometric data from the National Health and Nutrition Examination Study, investigators evaluated hearing impairment using high-frequency (3000-, 4000-, 6000-, and 8000-Hz) as well as low- or middle-frequency (500-, 1000-, and 2000-Hz) averages, at two levels of severity (>25 and >40 dB HL), in both the worse and better ear (Bainbridge, Hoffman, & Cowie, 2008). The results demonstrated that the prevalence of hearing impairment depends on how the condition is defined, but a greater prevalence of hearing impairment was observed among adults with diagnosed diabetes than without, regardless of the definition used (see Figure 1). 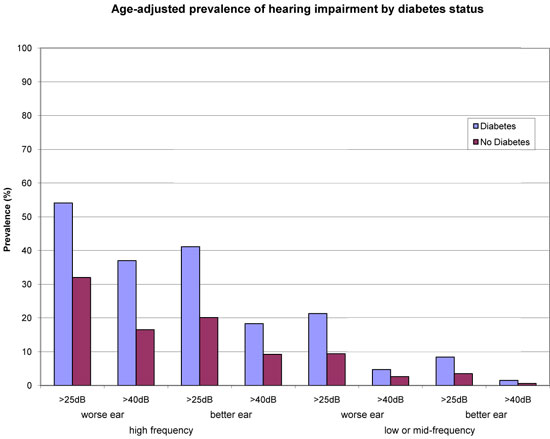 The analysis examined the relationship across a variety of sociodemographic characteristics. The greater prevalence of hearing impairment among persons with diabetes occurred across groups of age and educational attainment (see Figure 2a) and in both men and women, as well as in people who identified as non-Hispanic White or non-Hispanic Black, and those for whom specific race or ethnic information was not available (see Figure 2b). 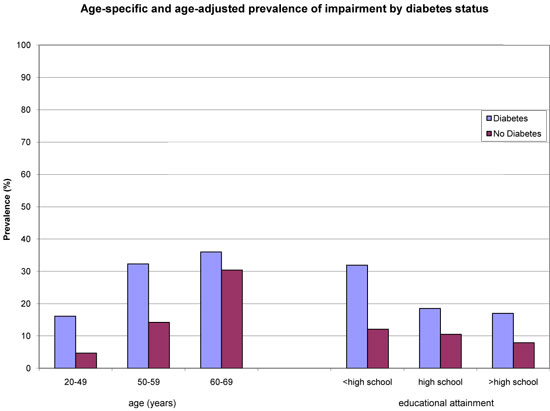 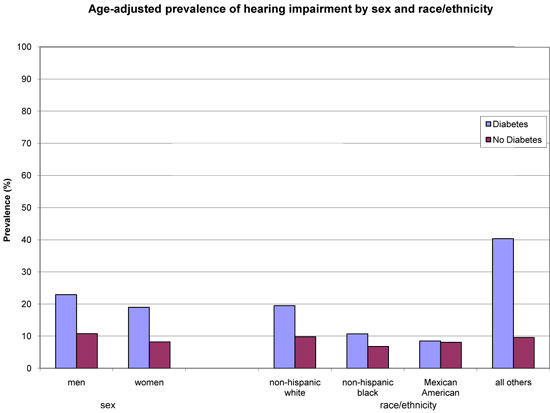 Further analyses demonstrated a stronger link between diagnosed diabetes and hearing impairment in younger people than older people. This observation might explain why previous studies that recruited older individuals were unable to demonstrate a relationship (as was the case for the Framingham study) or revealed only a moderate association (as in the Epidemiology of Hearing Loss Study). With a variety of competing causes that accumulate over a lifetime contributing to age-related hearing impairment, the difference in prevalence between adults with diabetes and those without seems to diminish with increasing age (see Figure 2a). This idea is supported when the mean pure-tone thresholds are examined by age group. Among persons age 30–39 years, mean thresholds at frequencies of 3000–8000 Hz are 10–16 dB HL higher among persons with diabetes. In each subsequent 10-year age group, thresholds in both groups increase, but the difference between the thresholds of the diabetic group and those of the nondiabetic group narrows. Among those 50–59 years old and among those 60–69 years old, the mean thresholds at 3000–8000 Hz are only 4–6 dB HL higher for those with diabetes. Diabetes may be prematurely aging the ear (Bainbridge et al., 2008).

The pathophysiological explanation for diabetes-related hearing loss is speculative. Diabetic complications including retinopathy, nephropathy, and peripheral arterial disease are primarily vascular in origin. Diabetic neuropathies affect peripheral sensation and various autonomic functions. The pathological changes that accompany diabetes may similarly cause injury to the vasculature or the neural system of the inner ear. Histopathological evidence of vascular or neurological involvement obtained from autopsied patients with diabetes includes sclerosis of the internal auditory artery, thicker vessel walls of the stria vascularis and of the basilar membrane, demyelination of the cochlear nerve, and atrophy of the spiral ganglion (Makishima & Tanaka, 1971). Loss of outer hair cells has also been observed among patients with diabetes (Fukushima et al., 2006).

The U.S. data suggest that among persons with diabetes between the ages of 50 and 69 years, more than 70% have high-frequency hearing impairment and one third have low- or mid-frequency hearing impairment. The data also suggest that persons with diabetes may experience hearing loss at earlier ages. Audiologists seeing middle-aged patients with unexplained hearing loss may wish to inquire about history of diabetes and family history of diabetes. Patients with diabetes should be encouraged in their efforts to maintain good blood glucose control in accordance with guidelines from the American Diabetes Association (2010). Patients who do not have diabetes but who have a parent or a sibling with diabetes should be informed that they are at increased risk of diabetes and may benefit from regular blood glucose testing.

Kathy Bainbridge is an epidemiologist working for the National Institute on Deafness and Other Communication Disorders. Her interests include understanding the natural effects of aging, particularly presbycusis and its relationship to common chronic conditions such as cardiovascular disease, diabetes, and other metabolic disorders. Contact her at
bainbridgek@mail.nih.gov.